Chaos was an experiment.  I am absolutely thrilled that I gave it a go at all.  I wish the sun would peek out and the clouds would lift go get a good photo for you as the fabrics are so bright and cheerful.  I'm not that lucky...you get a bleak winter in Ireland photo instead. 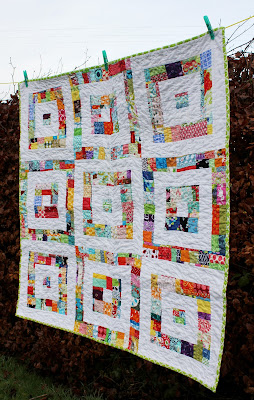 Even though it's a bit grey, don't let that dampen your excitement.  I love this little quilt.  I like the idea of using my old scraps to make a fabric that is unique to me and my sewing history.  You really do have to look closely to see that each colorful bit is pieced; at a glance it just looks like a basic square in a square quilt. 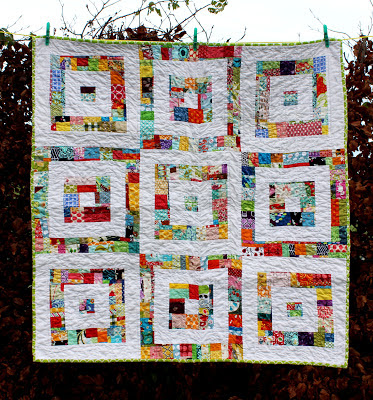 There are a few things that I would change if given the chance.  I wish I used a colored (or cream/grey or white) thread to quilt it when I used invisible thread just to not add more chaos to the already insane little strips.  That's easy enough to make a mental note and not fall into that trap again in the future. 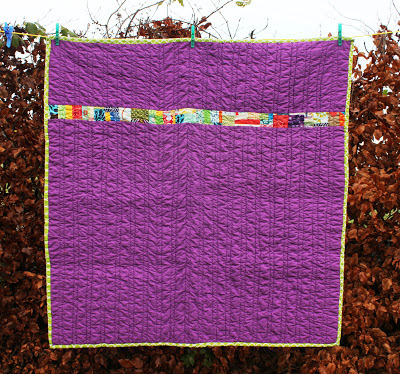 The back is just yummy.  It's Kona Magenta with a strip of scrappy bits running through it.  I think it looks just smashing with the Chartreuse Metro Circles used in the binding. 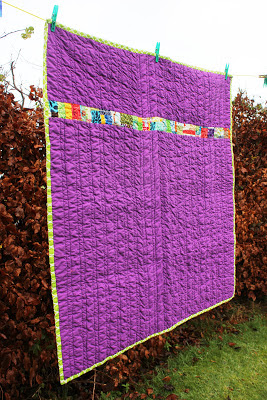 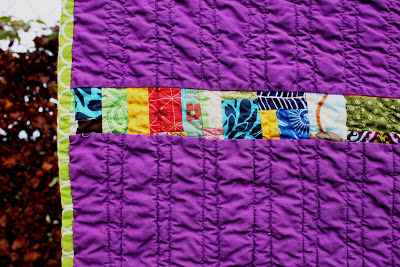 Chaos is quite small, finishing at 42 x 42 inches square.  I have such a huge piece of scrappy fabric left over that I might make a second, larger version to use myself on the couch.  We will see.  It just came together so quickly after the scrappy fabric was finished that it is a shame not to make a second every day version.  Maybe in 2013 when I'm starting with a new quilty slate....and the sun comes out again to give a little justice to the finished quilt photos!

Name - Chaos
Made For - The fun of it.
Fabric - All 100% cotton scraps pieced into a fabric, then interlaced with Kona White.  The back is Kona Magenta (pre-washed!) with a stripe of scrappy bits.  The binding Metro Circles.
Thread - Pieced using a cotton cream Aurifil 50 weight.  Quilted with invisible thread.
Batting - 100% cotton.
Size - Approximately 42x42 inches
Quilting - By myself in straight lines 1/4 inch from the seams of the square in the square blocks.
Pattern - Based on a quilt first glimpsed on Completely Cauchy.
Posted by Cindy at 10:14 AM

It's absolutely gorgeous and inspires me to see what other blocks can be made in interesting ways with scraps!

I love it! You can tell it's vibrant, even in the Irish gloom.

Wow it looks wonderful, and that backing is gorgeous, funnily enough I posted about my finished scrap quilt today too - kick started by this! thanks xx

A wonderful splash of colour, just what one needs on a grey day! Jxo

oh wow- i absolutley love it. You are very hard on yourself with your comments. I think it is really terrific and you have doena great job

I love it and I think you should definitely make another. I also love the back and now want some Magenta too. I hope you give away that invisible thread, as you have a wall of colourful threads to look at and use.

I love your quilt! I hope you don't mind, but I pinned it so I can make one too. Love using up little crumbs of fabric!

Nothing like a finish...but well know about the grey days!

Great finish! I couldn't agree more, the magenta and the binding are perfect together!

Great finish! I couldn't agree more, the magenta and the binding are perfect together!

Great job! The backing and binding are absolutely perfect! Yes, make another!

Quilting In The Cold said...

Oh it is so lovely!

I'm the queen of organized chaos and this chaos is just lovely Cindy!!

Beautiful! I love it! Feeling rested?

I love this idea. And you executed it brilliantly. It is a gorgeous wee quilt.

It looks fab now it's all done, and of course you need to make another one, but add some more scraps from other things first so you get something completely and utterly different in the mix :o)

this turned out lovely

It's a neat quilt and I can see why you're so happy with it! I like the bright back with the binding that you chose.

This is just completely stunning! The magenta colour is so beautiful. I'm a complete novice sewer so I'm totally blown away by this.