Saturday is Fluffy Sheep Quilting's fourth birthday!  It amazes me that this adventure is thriving, growing and increasing momentum each day!  This is only possible with your continual support and encouragement, so please celebrate with me at the shop's birthday party!

Starting right now there is a 15% off SALE in the online shop. Just click over here to have a peek at the pretty fabrics, pile your favourites into the cart and use the code birthday at checkout to receive your discount.  The discount code will be good from Friday morning to 11:59 PM Sunday night (Irish time).

I have tried my best to be sure the inventory is up to date when kicking off this sale, but sometimes there are mistakes.  Please know I will fill requests in the order they arrive. 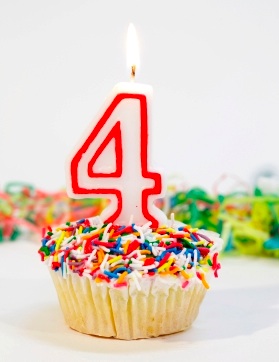 I thank you all for making this adventure so much fun.  I thank you for the laughs, the encouragement, the cheers when I feel overwhelmed and for your suggestions along the way.  The spirit of our wonderful quilting community continues to shine through and brighten each of my days.

I know that we like to convince ourselves that Christmas presents not finished on time for gifting in 2015 are early for 2016, but I am officially late.

I had the best intentions to create two tree skirts as family Christmas gifts, but I just could not appliqué fast enough.  Instead I printed out two photos of what the tree skirts would look like when finished and gifted those!  (*hanging my head in shame*)  After the season ended, the pressure was off and the tree skirts sat untouched. 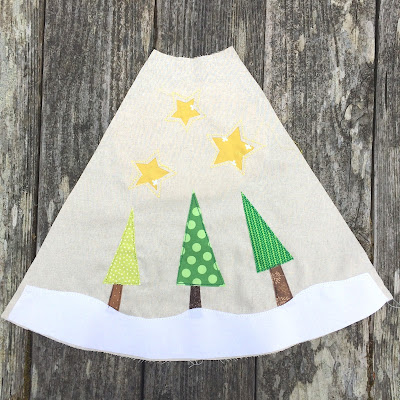 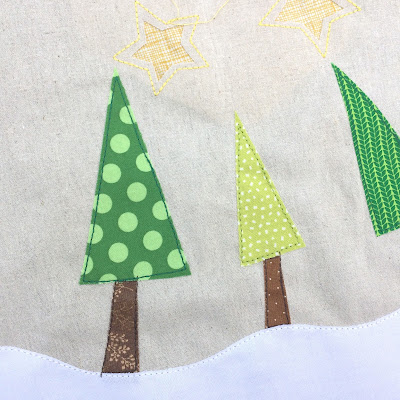 They are now next on my to do list, so I am dust them off, reassessing my progress and figuring out where I need to begin.  I am really excited to dive in again now that there has been a small break.

Since these were super top secret presents, I am not sure I told you about their start.  In autumn of 2015, there was a Yule Tide tree skirt sew along.  Although I did not officially sew along, I was quite happy to use a discount code to get the skirt and use the tutorials to help me along.  (Anyone looking for a tree skirt pattern for 2016, I would absolutely suggest scooping this one up.  It's very easy to follow, has super ideas/tips and makes a pretty cute finished product!) 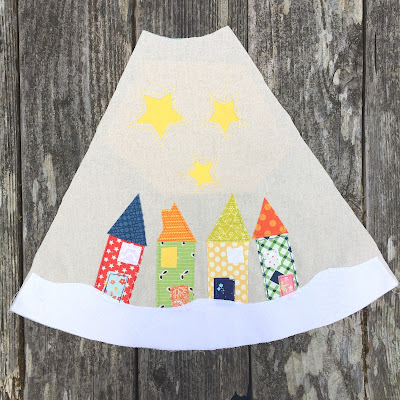 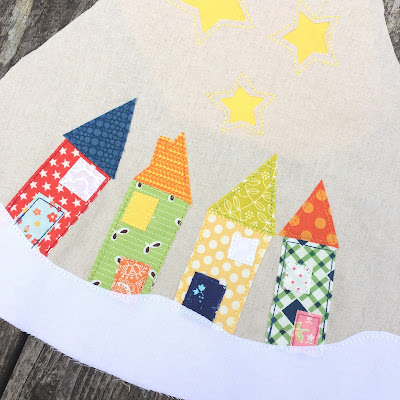 Each skirt is made of six wedge shapes, three with trees and three with houses.  I am making 12 in total, then.  They are very scrappy and colorful, made with fusible appliqué and some reverse appliqué on Essex linen.  I have six panels completed and six that still need stitching around the stars.  All of the houses still need windowpanes sewn on and threads secured.

They will need to be pieced together into a circle, layered, quilted and bound.  I am not sure how I want to quilt them as I really do not want an all over design.  I was thinking of hand quilting around the stars, machine quilting through the snow and down each of the joining seams.  These panels are not that large, so that might be enough.  We will see how it evolves with time. 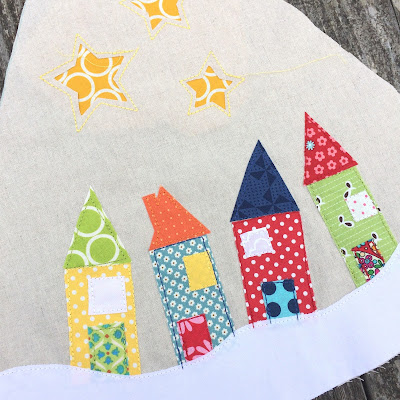 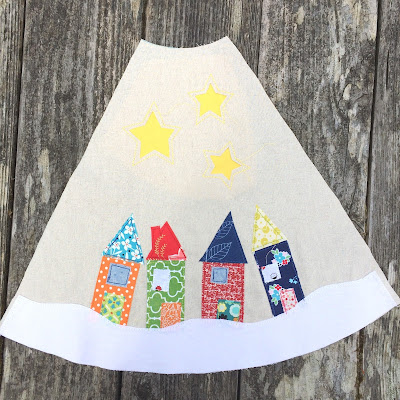 The goal is to have these finished and posted before June 25th!  Fingers crossed - if it goes any later in the year it really is a 2016 Christmas present and that's just cheating gifting it twice!

...goes a long way.  I have had a little pouch sitting on my sewing table since mid-February waiting for my attention.  I move it, dust under it and look at it but have not put in the 30 minutes of effort to transform it into something useful.

Do you remember this little extension table cover that did not quite fit? 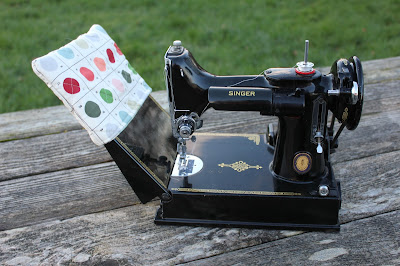 I finally installed a zipper to make it into a little pouch that I can use when travelling.  It can easily fit inside my featherweight's case stuffed full of threads, bobbins and needles.  I hesitated for a long while because I didn't have a zipper that coordinated with the spots on the exterior.  I then got over myself and just choose a navy one that "vibed" pretty well. 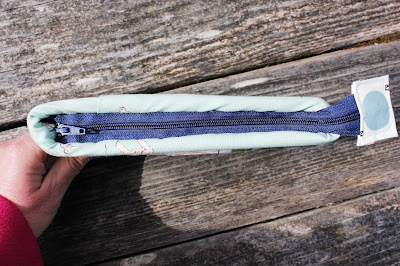 I added a little coordinating zipper tab and held the zip in place with a piece of binding.  I wish I had made the binding one continuous loop instead of feeding it back inside itself (like I do with a quilt binding), but this was all a bit improvisational (AKA learn as you go). 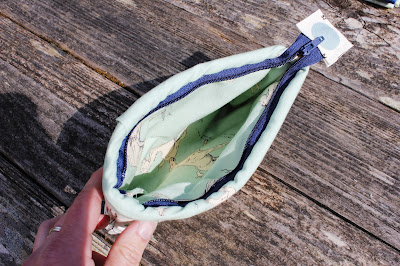 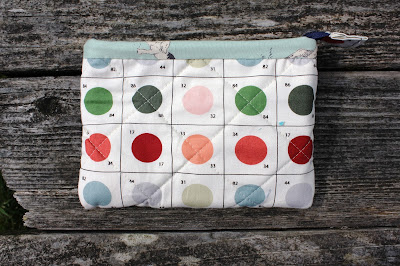 So there you go!  It's finally off of my sewing table, tucked away with my complete travel set.  Checking off number 3 from my FAL Q2 list.

This past weekend was a holiday weekend here in Ireland.  I was lucky enough to have Monday off, giving me LOTS of sewing time.  I sewed so much that by the second afternoon I felt like I needed a sewing break!  Now that's crazy talk.

What did I stitch?  Most of my time was spent sewing a super top secret project that needs to be finished in the next few weeks.  I had finished foundation pieing my scrappy strips a while ago (using a tutorial by Coriander Quilts) so this weekend I added on the side triangles.  Here I am using Essex Linen in Medium Aqua.  I'm delighted with my background color choice.  Adding on the side triangles gave me a bit of time to pay better attention and visit with each of my favorite fabrics.  I even found a few accidental fussy cuts! 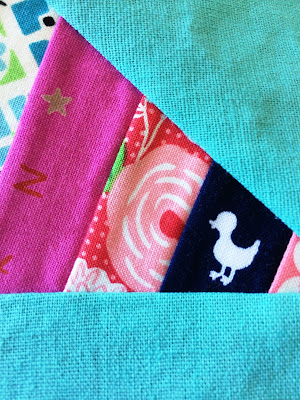 I ripped out the foundation paper from all 72 diamond shapes.  Nearly lost my mind doing that, so I had to watch a movie or two while ripping.... 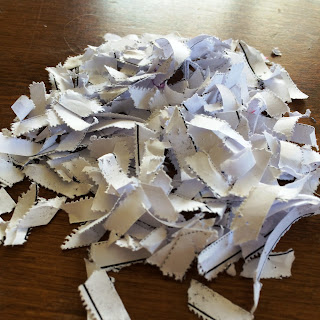 Even though foundation paper piecing is usually very exact, my biased side triangles got a bit wonky with ironing.  I had to do a bit of trimming, which made the final blocks less wonky.  Thank goodness I took the time to do that or else you'd find me in the loony bin today. 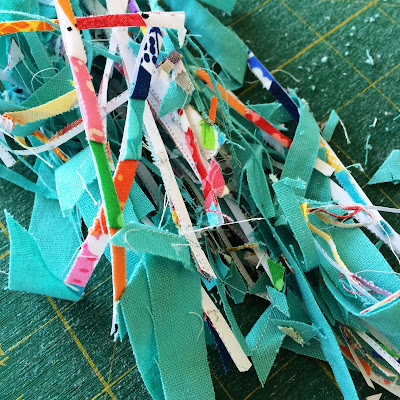 Eight little subunits became four quarter squares and eventually half blocks.  I love how quickly block come together at the end of piecing a top.  All of the preparation finally becomes rewarding. 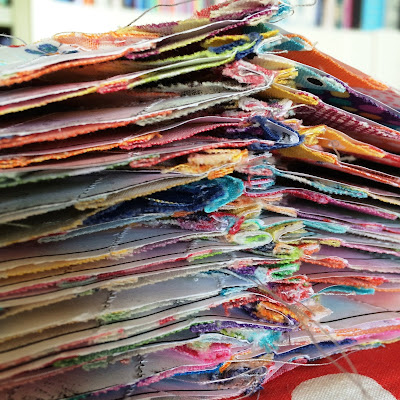 In this project the seams could (did!) get quite bulky, so I pressed open at nearly every opportunity.  It's not my favorite thing to do as I burn my fingers as much as I press seams, but you do what you have to do. 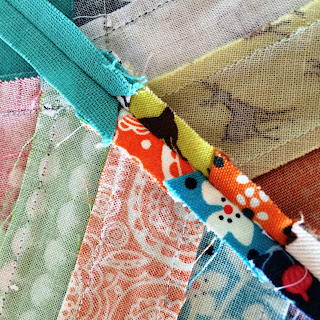 The top is finished now (woo hoo!) and the back pieced.  I am absolutely delighted to be this close to finished.  It's going to my friend Liz to be professionally quilted.  With all of those little seams weakened by ripping out the paper, I want to be sure it's securely quilted before it goes to its forever home.  Into the post today!

This is number seven on my FAL 2016 list.  Getting closer to checking it off!