In a delusional state in November, I decided I wanted to make a hexie tree skirt to give to my brother and sister in law for Christmas.  I was travelling over Thanksgiving, so I figured I could sew on the flight and in the car to/from Thanksgiving dinner and in no time I would have a top done and dusted.  I sketched out a plan, cut my Kona solids, printed my templates and was ready to sew. 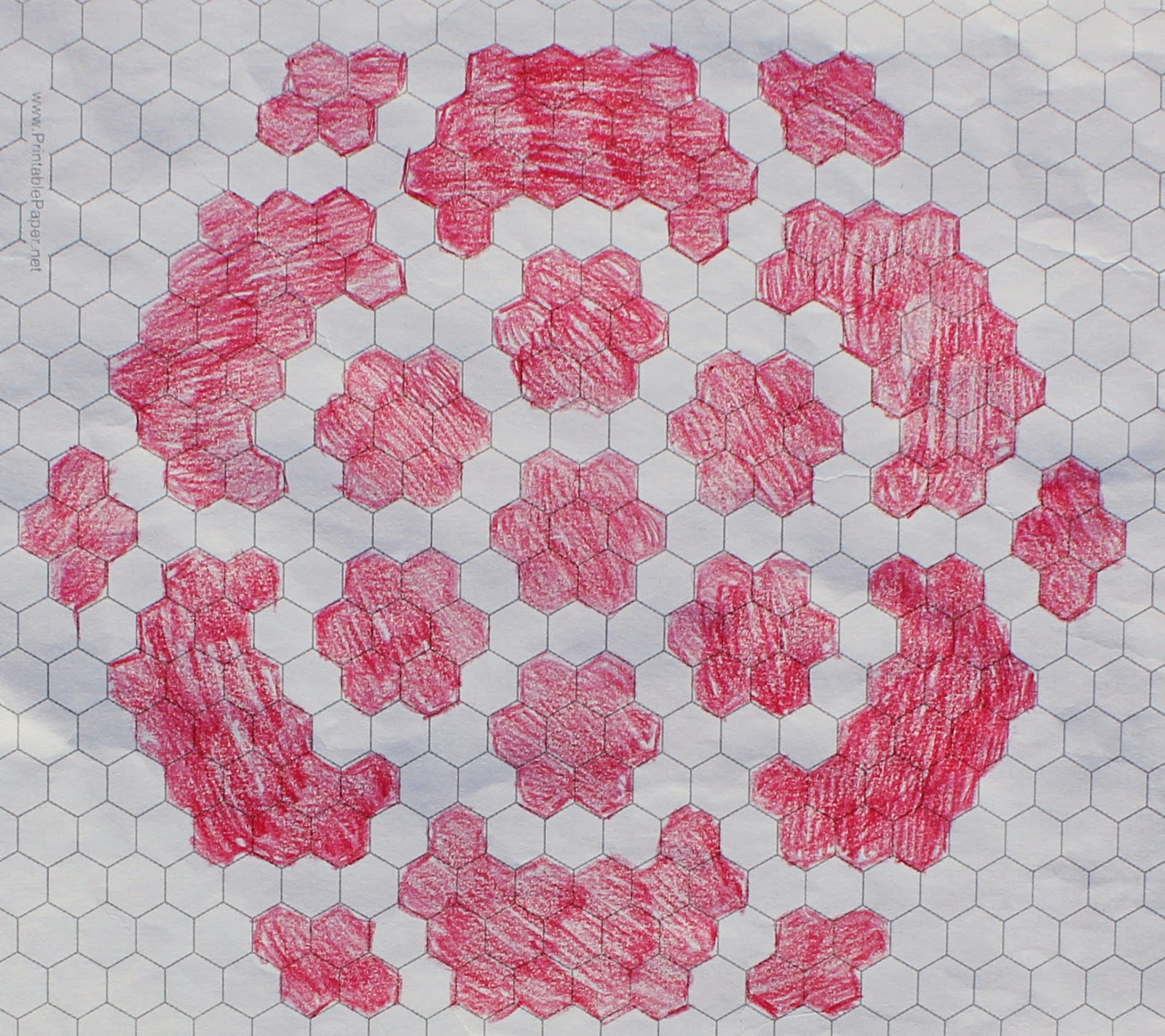 I basted hexies on the flight....where an air hostess asked me if I was going to color in the pieces covered in white fabric when I was done.  (What!?!?) 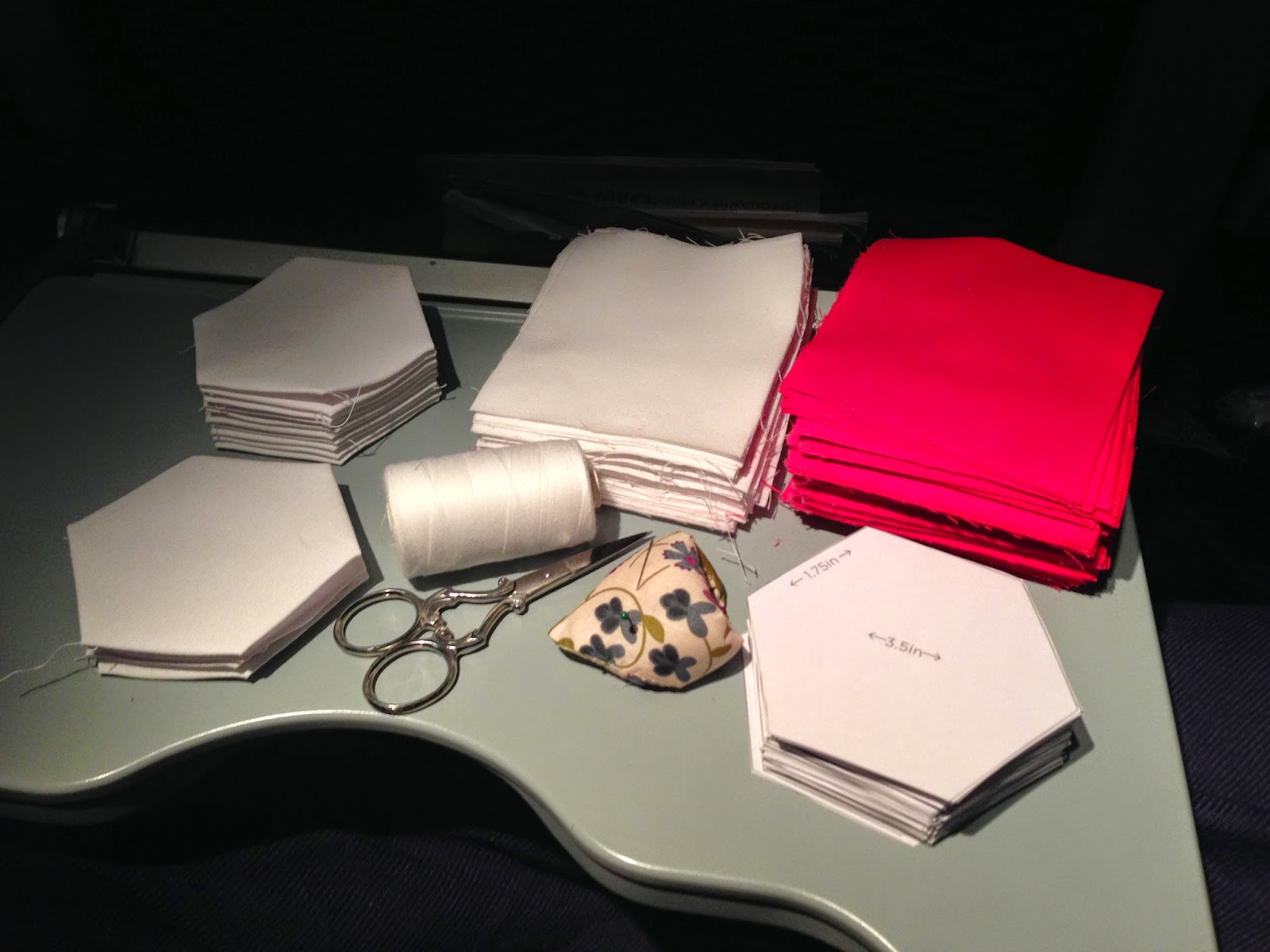 I set up a little station in the back seat of the family car when we were travelling.... 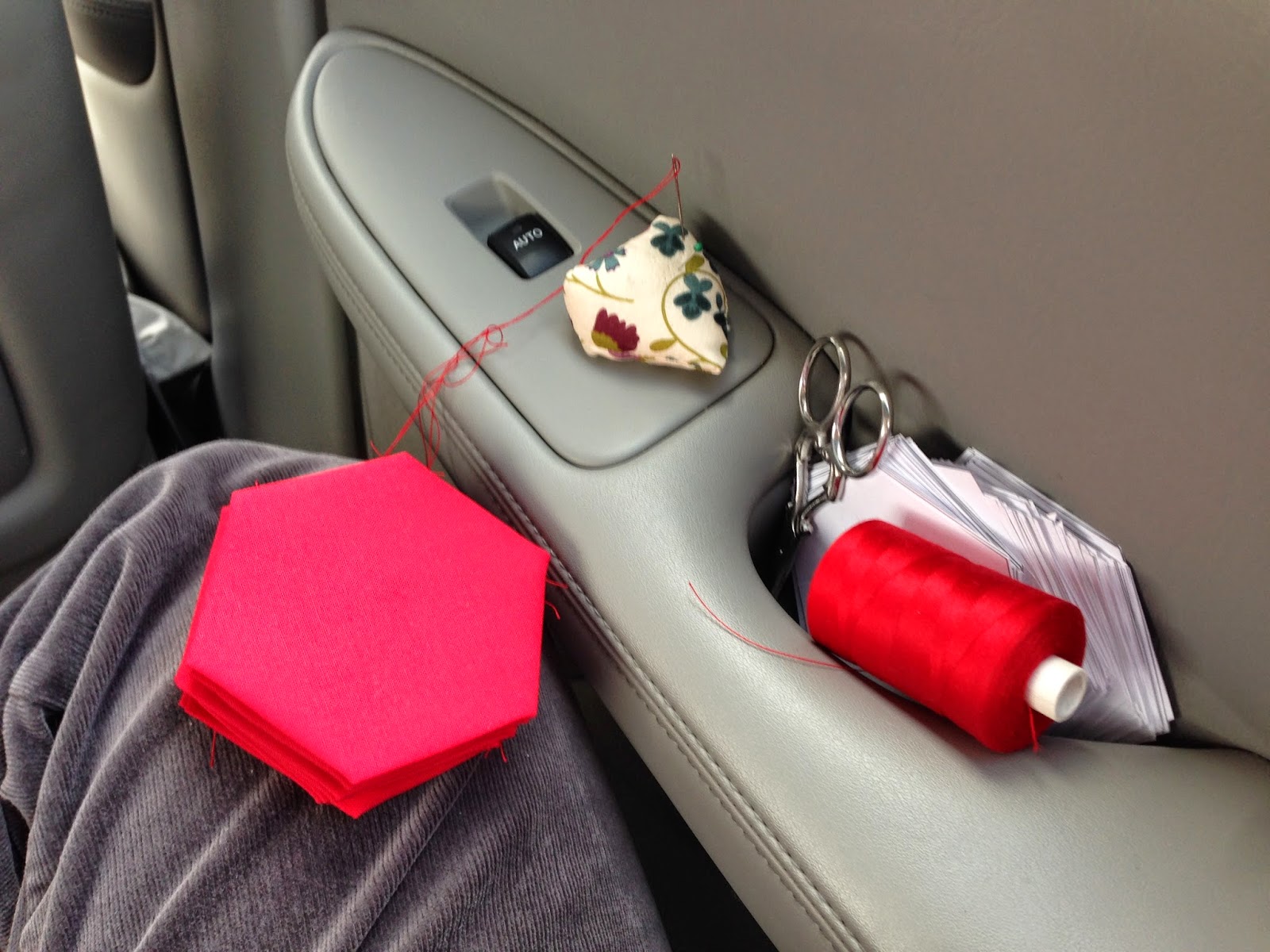 I was happy as a clam.  While I was in Pennsylvania, I picked up a glue basting pen thinking I'd like that a bit more.  I'm absolutely not sold on it and may return to hand basting.  Still, when I pulled out the glue pen I had a little volunteer who wanted to baste with me. 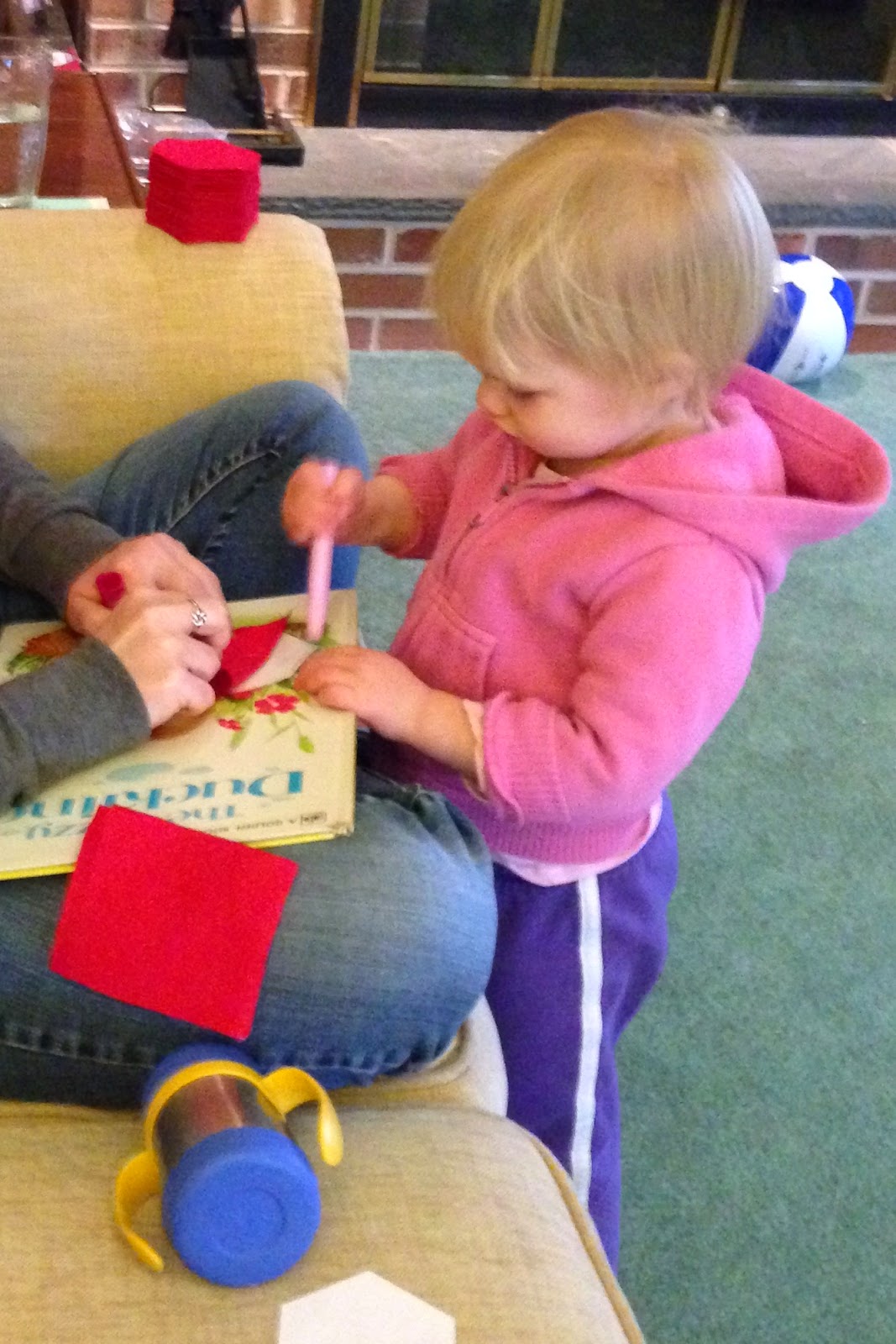 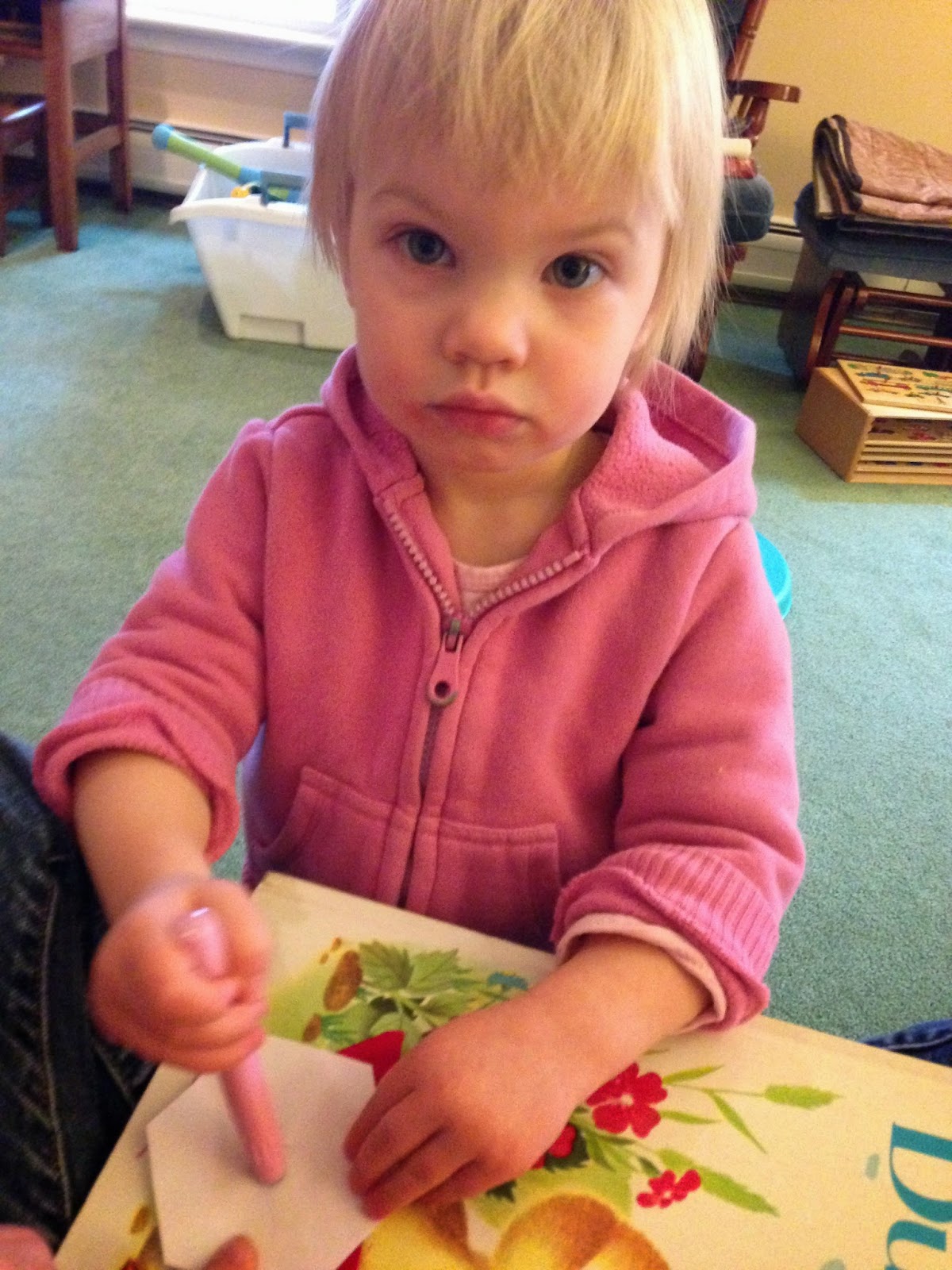 Given the flight to/from the states, all of the car travel that comes along with Thanksgiving and even a few weeks in December I still had basting to do.  I was going to miss Christmas 2014.

I have the pile of basted hexies here next to my seat on the couch, which has been working a treat. 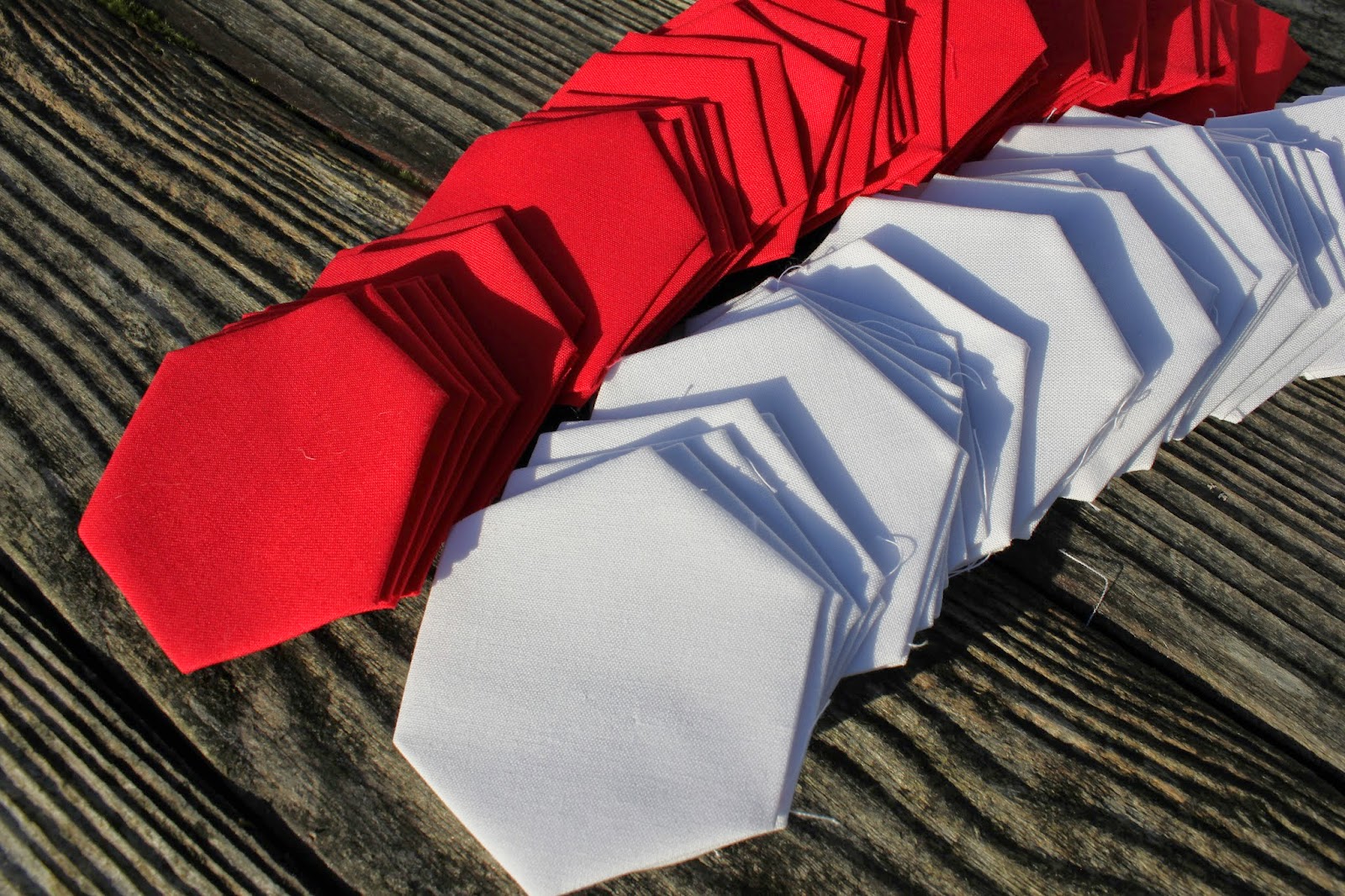 Some nights it is nice to have something to keep your hands occupied.  So I have started stitching together strands of white and clusters of red. 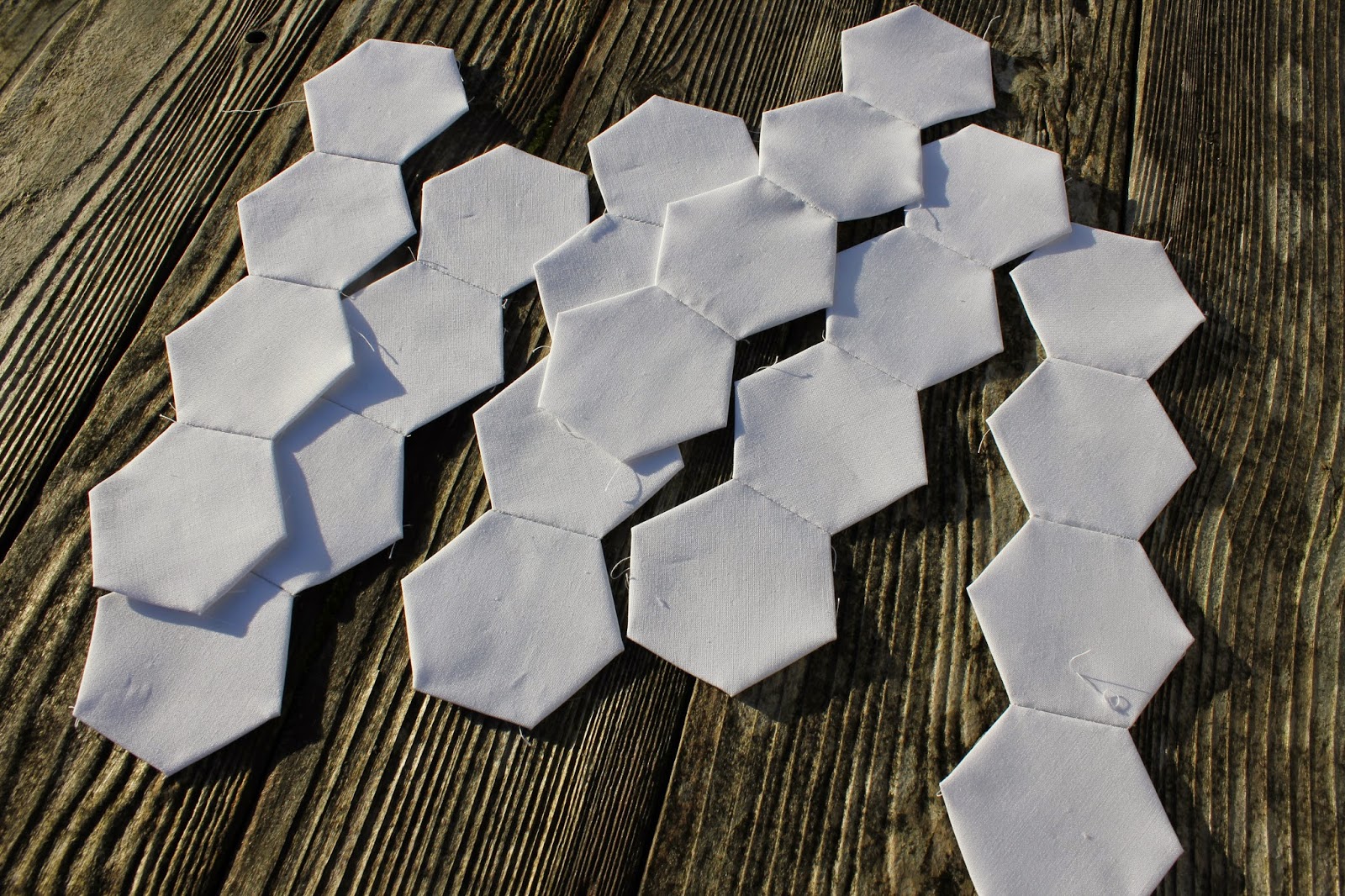 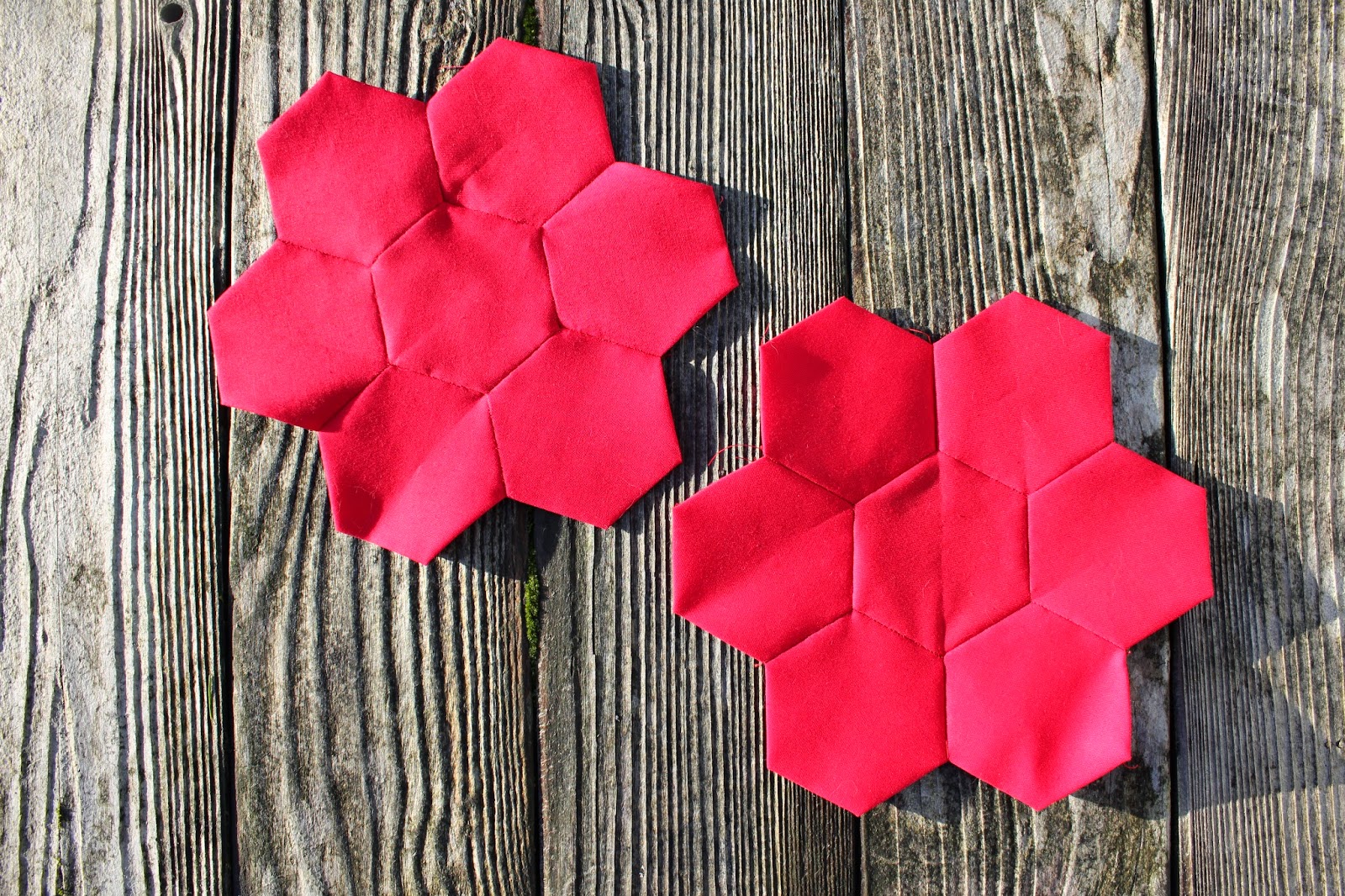 I am not going anywhere fast, but I like that this project is portable and mindless.  Let's be honest, I am in no hurry seeing as this is now a Christmas 2015 project.  I will just keep stitching.

Are you going to colour the white hexagons? I was wondering how your story continues. Thought perhaps you'll stitch/colour something. Lovely post and hexies are always hexies! I prefer thread basting, too. x Teje

Oh, it's lovely! And a good take & go project too as you don't have to match up too much. I also totally understand your delusional state as I think I've been in one for about 6 months. It doesn't seem to be waning either. :D

Great project! Just wondering, what size hexies are you doing?

Great idea and a beautiful basting assistant. It will be so wonderful come December.

It sounds like you have been having a great time with this project. I am guessing you will be done by next Christmas for sure.

I think many of may own projects are started in a similar delusion state! I do love your tree skirt design and it will defintiely make for a great portable project. I try to always keep some epp on the go these days so I always have something I can bring with me.

It's interesting to hear you're not sold on the glue stick as so many people seem to rave about them. I've been slow to try it myself as I've always hand basted as I'm not sure I like the idea of gluing the fabric to the paper

Will look fabulous under a green tree! I know what you mean about enjoying a hand stitching project, sat next to the fire or snuggled under a quilt - cold these nights alright!

Your little helper does not look impressed at your tardiness!!!

We could all do with a helper at times!

I have emailed you separately, you may recognise my email address...

what a wee cutie!

I look forward to seeing this one as you progress. Your daughter is getting so grown up. I remember when she was born. Seems like yesterday.

I detest stitching hexies. I wish I liked it because I love the finished projects but ugh.... Not for me!!!! Your helper on the other hand, she's a doll.

I had similar good intentions for a quilt gift for Christmas '14!! Still working on it!! This will look gorgeous C and worth the extended deadline! Jxo

Pretty! How do you not get sick doing it in the car? I can do nothing in the car :(

There's no rush, just keep doing a little bit at a time and one day it'll be done. I tried a glue pen in the summer and am similarly undecided. Actually based on my own experience I'd say I'd rather stitch baste but I keep thinking if everyone else is raving so much I must be missing something or doing it wrong. I found I needed to use a lot of the glue together it to stick and that would become pretty expensive in a very short time. Still need to figure it out.

While basting hexies on a flight (about two years ago?), I had a flight attendant tell me to put my "knitting" away... Knitting? Seriously?

How does someone get to be old enough to work on an airplane, and not know the difference between a sewing needle with fabric, vs. two long spiky knitting needles and yarn???

Delusions are how most of my projects begin! ;) still, these look great, and the skirt will be appreciated whenever you finish it! 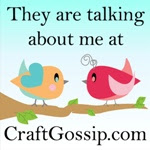 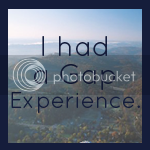